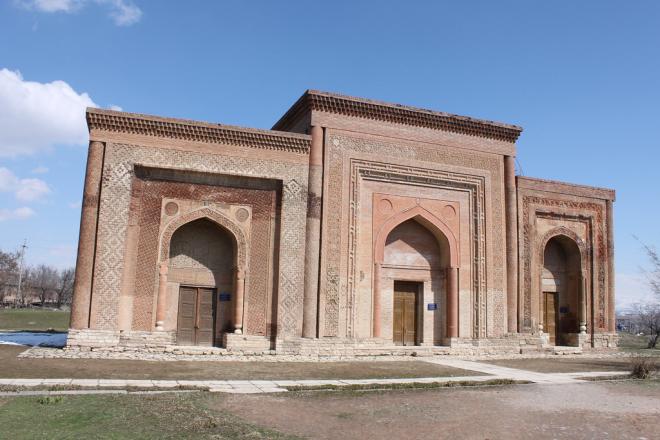 There are numerous interesting historical tourist places, and beautiful mountains, crystal water lakes in the southern part of Kyrgyzstan. The Kyrgyzstan Southern Region is the best part of Kyrgyz tourism including the three Osh, Jalal Abad and Batken oblasts (provinces). The region famous for its historical places , mixed culture, the 3000 years ancient city of Osh, city of Uzgen, the 11th-century Uzgend minaret, uzgen rice, remarkable Arslanbob wild walnut forest, amazing Chary Chelek Lake  and the  Sacred Sulayman -Too mountain, or Solomon Throne- most important place of Muslim and pre-Muslim pilgrimages.

The city of Osh is the 3000 years ancient city and it was an important part of the Great Silk Road. A long time ago, approximately for over two thousand years, the city was famous for its trade location, colourful and noisy eastern bazaars and cozy and safety caravanserais. Later, in the 8th century, Osh was known as a center for silk production along the Silk Road.

The nowadays, the city has monuments, including one to the southern Kyrgyz "queen" Kurmanjan Datka and one of the few remaining statues of Lenin. You can visit the Russian Orthodox Church reopened after the Soviet Union collapsing, the second largest mosque in the country, and discover the 16th-century Rabat Abdul Khan Mosque.

The Sulayman -Too mountain, Suleiman or Sulayman Rock, or Sulayman Throne is the only World Heritage Site located entirely in Kyrgyzstan. It is located in the city of Osh and was once a major place of Muslim and pre-Muslim pilgrimage. Sulayman (Solomon) is a prophet in the Qur'an .The rock also contains the National Historical and Archaeological Museum Complex Sulayman. Another the famous person Babur, founder of the Mughal Empire and descendant of Tamerlane, was born in the Fergana Valley, pondered his future on Sulayman Mountain and even constructed a mosque atop of the mountain.

By the time of Alexander the Great, the Arslanbob walnut forest was locally known for hunting. He took the walnuts from Sogdiana, and these formed the European plantations. He exported the walnut plants to Greece during his campaigns in Central Asia. This inferred from the usage of the word "Gretski" (meaning "Greek" nuts) for walnuts in Russian. Later, it is nicknamed as the ″Greek nut″.

The ancient town is famous for the 11th-century Uzgen Minaret, 11th-century historic bathhouse, 12th Century Karakhanid Mausoleum, Uzgen Archaeological-Architectural Museum Complex, the 17th century pilgrims ’mazar of the Al-Sarakhsi Shams al-A'imma. In addition, the town offers many tours such as the famous noisy colored eastern bazaars (market) tours, street rice mills tours and more and more…The town is one of must see places in Kyrgyzstan.

The Sary-Chelek Biosphere Reserve situated in the western Tien Shan Mountains (in Jalal-Abad Province) on the southern spurs of the Chatkal Range in the west of Kyrgyzstan. The main part of the area comprises a high mountain basin protected to the north, west and east by mountain ridges. The gorgeous mountain lake Sary-Chelek located at about 2,000 meters above sea level, with an area of 470 hectares and a depth of 245 meters. The surrounding mountain ranges protect the lake from the cold winter streams: therefore, has a favorable microclimate.  The weather in wintertime is quite mild and rich in snow, and summers are warm and wet. The biosphere reserve ranges elevation is from about 1,200 to 4,300 meters above sea level. Main surroundings comprise forests, meadows, steppes, rocks, and screes and some aquatic areas. The central and lower region separated and covered by wild nut-fruit forests with walnut, apple, pear and forest floor.

AI TOUR Kyrgyzstan Travel Agency will provide all things you needed for the period of the Kyrgyzstan Southern Tours & Travels adventures.

To book your travel to Kyrgyzstan, Central Asia, please, contact us.